Natusfera celebrates one year with almost 2,000 users and 13,600 observations

Natusfera celebrates its first year of operation and we can’t be more satisfied when analyzing the evolution of its activity: more than 13,600 observations have been recorded and there are already almost 2,000 naturalists who share their knowledge and concerns with the community. We are currently in a phase of exponential growth, which reflects how citizenship is increasingly involved in the conservation of the biodiversity.

Graphs of the evolution of the number of users and observations in Natusfera since the beginning of the project. Author: GBIF.ES

CREAF, the Royal Botanical Garden of Madrid (RJB-CSIC), the Institute of Marine Sciences (ICM-CSIC) and GBIF Spain (the National Node of the Global Biodiversity Information Facility) joined in 2016 to create Natusfera, a citizen science platform that aimed to track the biodiversity around the world. Today, Natusfera is already a reality; it can be considered a social network of naturalists who share information, identify species and collaborate in some of the 128 biodiversity monitoring projects registered by the platform until this date, many of them with their related subprojects. Through these projects, the participants can explore the biodiversity of a particular area or investigate a specific taxonomic group. In this sense, Natusfera has been the platform chosen to obtain citizen data of the presence of exotic species within the Spanish network of National Parks or as an early warning system for the arrival of exotic species to Catalonia.

Moreover, its good reception by groups and conservationist associations contributes to create a great network of naturalists from very diverse fields spread out throughout the geography. An example is the Association for the Conservation of Butterflies and their Environment ZERYNTHIA which has the Lepidoptera of Spain project. In its five subprojects, there are more than 600 observations of Spanish butterflies, both day and night species, and in all their stages –adults and caterpillars–.

We also want to highlight the development of the mobile versions for Android and iOS that allows you to take Natusfera to the nature. And so that nature is closer to all, very soon you will be able to download the records from the GBIF portal (http://datos.gbif.es). 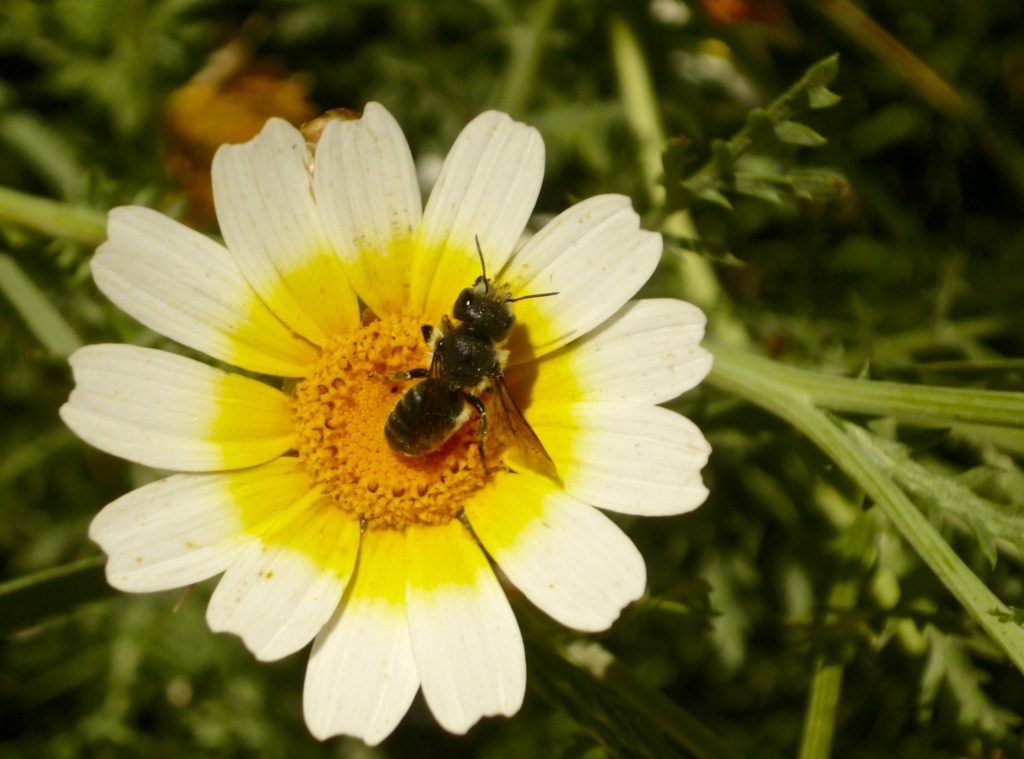 This observation of a bee that nests alone (Osmia latreillei) on a flower of the composite family is part of the SOS pollinators project (Author: CC BY-SA 3.0 Ana).

Natusfera has been very well received among schools. The platform has been presented in different activities, such as bioblitz, presentations in classrooms, or as part of the activities of the Royal Botanic Garden (RJB-CSIC), CREAF or CSIC Institute of Marine Sciences. The platform has several projects that have been created by schools, among them the Natusfera Biodiversity Congress (Instituto Salas i Xandri), an activity IN WHICH the students from the first year of secondary school of this institute –located in Sant Quirze del Vallès (Barcelona)– created and exposed posters about the biodiversity of the mountain range Serra de Galliners. The work consisted in identifying and classifying the diversity of animals and plants in three different habitats of the mountain range –pasture, forest and riverbank– by using Natusfera as a platform to share, record and organize the information. Following that method, 140 observations of 24 different species were made. With the analysis of these data through the scientific method, the students produced posters to learn and understand the biodiversity of the area.

Other important examples include the Biodiversitat in Sant Feliu de Llobregat project of the school Verge de la Salut, which has more than 300 observations of 130 species of animals and plants of this city, and the SOS pollinators project, coordinated by GBIF Spain and RJB-CSIC, which is being developed with the students of several schools and institutes in Madrid. The data obtained will allow to discuss about the maintenance of the biodiversity in these urban areas to try to find solutions to the environmental problems detected.